The neocortex can be viewed as a tapestry consisting of variations of rather stereotypical local cortical microcircuits. Hence understanding how these microcircuits compute holds the key to understanding brain function. Intense research efforts over several decades have culminated in a detailed model of a generic cortical microcircuit in the primary visual cortex from the Allen Institute. We are presenting here methods and first results for understanding computational properties of this largescale data-based model. We show that it can solve a standard image-change-detection task almost as well as the living brain. Furthermore, we unravel the computational strategy of the model and elucidate the computational role of diverse subtypes of neurons. Altogether this work demonstrates the feasibility and scientific potential of a methodology based on close interaction of detailed data and large-scale computer modelling for understanding brain function. 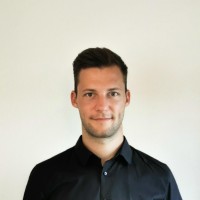